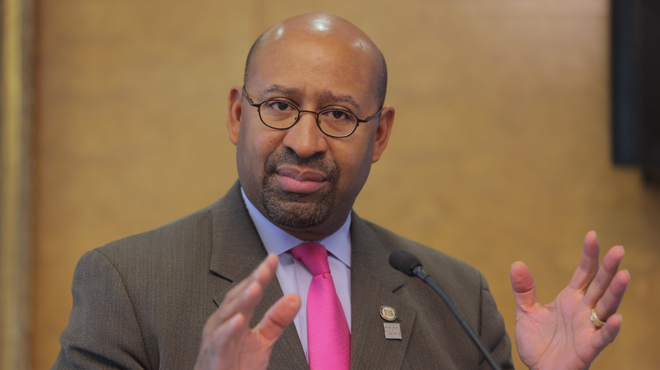 Nutter served as the 98th mayor of Philadelphia—the nation’s fifth largest city—from January 2008 to January 2016, and as president of the U.S. Conference of Mayors from 2012 to 2013. During his time in office, he was widely recognized as a reformer, leading changes in policing, economic development, taxation, sustainability policy, and other areas. In 2014, Nutter was named as one of Governing magazine’s Public Officials of the Year; in 2011, Esquire magazine cited him among its Americans of the Year. During Nutter’s mayoralty, Philadelphia’s city government received more than 150 awards for innovative programs, good government practices, and general excellence.

Before winning election as the city’s chief executive, Nutter served on the Philadelphia City Council for almost 15 years, from 1992 to 2006. He was also the chairman of the Pennsylvania Convention Center Authority Board from 2003 to 2007.

“I’m delighted that Michael Nutter will be joining the SIPA faculty this semester,” Janow said. “As mayor of one of our nation’s largest cities, he has earned a national reputation as a leader in urban public policy— addressing key challenges in economic development, public safety, environmental innovation and many others. I know we will all benefit from his insights and experience.”

“We are proud to welcome former Mayor Michael Nutter to Columbia,” said President Lee C. Bollinger. “We know that Mayor Nutter's respected leadership both in the City of Philadelphia and among the nation's mayors will make a major contribution not only to our School of International and Public Affairs, but to the broad and growing work on urban issues that Columbia faculty and students are doing across the university both locally and globally.”

“Michael Nutter has an exemplary record of leadership in Philadelphia, and I welcome him to SIPA and Columbia University with great enthusiasm,” said David N. Dinkins, who joined SIPA as a professor of professional practice in 1994 after serving as New York City’s 106th Mayor. “Michael earned our nation’s respect as an effective reformer, one who innovates urban renewal while keeping humanity at the forefront of every goal. I have enjoyed getting to know Mayor Nutter over the years and find him to be a person of tremendous character, heart, and humor.  He will be an exciting and inspirational voice at SIPA and for all students in the Columbia community at large.”

In his two terms as Philadelphia’s mayor, Nutter saw the city fulfill many of the major goals he set. As part of an overall reduction in crime, homicides fell to their lowest level in almost 50 years. Improvements to the education system saw rates of high school graduation and college attainment increase. The city launched a bike-share system, added miles of bike lanes, and pursued other environmental reforms.

After taking office amid a global financial crisis, Nutter oversaw an upgrade to Philadelphia’s credit rating that brought it to the A category for the first time since the 1970s. He reformed the city’s property assessment system and worked to attract new residents and businesses. As a result, Philadelphia grew in population each year and welcomed billions of dollars in new investment.

He also spoke often of the importance of ethical and transparent government that strives to provide efficient and effective customer service.

“I am deeply honored and excited to have been asked to serve as a professor of professional practice at the School of International and Public Affairs at Columbia University,” Nutter said. “The opportunity to work with such distinguished faculty and incredible students at this internationally recognized university is an enormous responsibility, and creates an important platform to continue my focus on the leading urban challenges in the United States and around the world. I look forward to actively engaging with the Columbia University community.”

In addition to serving as president of the U.S. Conference of Mayors, Nutter served one year as president of the Pennsylvania Municipal League (2014-15). In affiliation with the National League of Cities, he joined Mayor Mitch Landrieu of New Orleans to launch Cities United, an initiative aimed at creating partnerships between cities, nonprofits, and other stakeholders to combat violence and crime among African-American men and boys. Nutter also serves on President Obama’s My Brother’s Keeper Advisory Committee.

Nutter now joins Dinkins as the second distinguished mayor on the SIPA faculty. The School also welcomes municipal leaders from the United States and abroad to campus each year as part of its Global Mayors Forum.

A West Philadelphia native and lifelong city resident, Nutter was educated at the University of Pennsylvania’s Wharton School. He is happily married to Lisa and a proud parent of Christian and Olivia (who is a member of the Columbia College class of 2017).