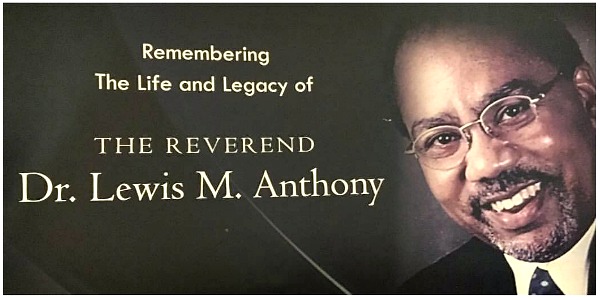 On Memorial Day, a day to remember military veterans who paid the ultimate sacrifice for our freedom, I learned of the death of Reverend Lewis Anthony, who we always knew as  "Tony" or just "Lewis."

Long before he went to Yale Divinity School or graduated from Harvard Law School, my roommate Barry Smiley and I met Tony as we registered at Columbia for freshman orientation. The black students at Columbia had organized a welcoming reception and mentoring program to help entering black students navigate the difficult academic waters of an Ivy League institution.

When I walked into Hartley Hall, there was Tony grinning and waiting for me. "So, Thomas, you are one of those upper Northwest bourgeois Negroes; well I am Tony from Southeast, DC, Anacostia, and you are my mentee," or words to that effect. The 45 years since those words were uttered have dulled the accuracy of my memory, but his intent was unforgettable and unmistakable. I had just been intellectually and culturally challenged by Tony who was from one of the poorest neighborhoods of my hometown of Washington, DC.

For the next four years, Tony would contrast his experience at his D.C. public high school with my experience at the New Hampshire prep school that Smiley and I attended. As time went on, I would later come to realize that when I first met Tony, I had not been challenged, but I had been touched by one of God's angels.

As Tony helped guide me through college, law school, and life, I have become a better person because I was fortunate enough to have Reverend Lewis Anthony as my freshman mentor. Tony was a man whose conduct demonstrated his spirit of giving to others and giving back to the community.

Tony constantly reminded my classmates and me that we did not get accepted to Columbia because of our high school grades, or our SAT scores, or other high school successes. We were at Columbia because people had marched and rioted in the streets for us to have the opportunity to go to these fine institutions of higher learning. He would tell us that people in the Civil Rights movement had been spat upon, beaten, and assassinated so that we could have the opportunity to walk these hallowed halls.

Tony, however, was no “Mau Mau” brother; he encouraged us to take full advantage of the educational opportunities available at Columbia.  We were intellectual guerrillas in training. He and other mentors at Columbia made themselves available to provide tutorials at the Malcolm X Lounge (achieving its name as a concession to a student unrest before our time). Tony was one of the organizers who provided mentoring and support services that were necessary to survive the academic rigors of Columbia and the temptations of New York City.

With Tony, it all started at the beginning. He of was a doer and not merely a talker (and, boy, could he talk). Tony sat down with Smiley and me, and numerous other freshman minority students, and helped us make out our course schedules. "Six courses and 19 credit hours along with 20 hours of work study was not too much us," he proclaimed. He assured us that he would be there to help -- and true to his word, he was, and has always been there to help us. Whether discussing the Allegory of the Cave in Plato's Republic or organizing a trip to the Metropolitan Museum of Art to fulfill the Art Humanities course credit, Tony was always there.

Long before he guided his parishioners in the original Greek text of the Old Testament, he was guiding my classmates and me between the Scylla and Charybdis (the rocks and the whirlpool) as we studied Homer, Aristotle, Machiavelli, and Shakespeare.

Tony was one of the few individuals who always walked it like he talked it. For example, during my sophomore exam period, I and some other students had gathered in Tony's dormitory preparing for a college all-nighter. Tony, a senior, had a heavy class load and we both were taking a course, "the American Presidency," and we had a 48-hour take home examine.  One brother, we'll call him "TJ," had not been taking care of business all semester. TJ came to see Tony because TJ had a paper due the next day in Contemporary Civilization. TJ asked Tony to help him.

We were all aghast of the nerve of this brother. Not Tony. Tony put down all of his work, went down the hallway and helped this brother for next two hours to prepare a term paper. Of course, we always tried to help each other, but this was different--it was exam period! On planes, the flight attendant tells us to put on our oxygen mask first before helping anyone else. Did I say this was exam period!

Academic, if not actual, survival was at stake! "Lo and behold," there was Tony sacrificing valuable studying time, to help someone who had been loafing all semester. Over those two hours, Tony taught TJ the course and helped him with his term paper. I remember thinking then that Tony was a better person than I could ever hope to become. This was Tony -- a true believer of sacrificing to help others.

While in college, Tony and my classmates often went to dinner at the Chinese Cuban restaurant on Broadway (where the red beans and rice were both delicious and inexpensive). After good food, challenging conversation, and a few rounds of the "dozens," we returned to the to dorms for a serious evening of intense studying. Tony knew how to play the "dozens," but with him it was a different game. He played the "dozens" without cursing and using such an enormous vocabulary that you needed a dictionary and a thesaurus just to try to understand the magnitude of the slight he just leveled against you. I did not know what an "intellectual crocodite" was and did not know how to respond when he called me one. So what if King Lear could see clearer than I could? That was the dozens, Tony style.

Tony was not a gifted athlete. He didn't play basketball. Tony and I played handball a few times, but the ball caused your hand to swell. Tony passed the swimming requirement by swimming on his back across the pool. This was not graceful, but it effectively eliminated another graduation requirement. Nevertheless, at our freshman orientation, no one who saw Tony and Greta dance to James Brown's "Get on the Good Foot" will ever forget how they "Cut the Rug" that evening.

Because Tony cared, gave, and challenged me, I later followed him to law school where he continued to mentor me as well as others, blazing a trail, yet leaving a path. We now had dinner at Three Aces on Mass Avenue, a greasy-spoon pizza joint, before study hall. We were now discussing property law, criminal law, and Constitutional theory. He was my practice "judge" for moot court competition. Even though we were trapped in the quagmire of law, Tony would not let us forget that we stood on the shoulders of those who came before us: Charles Hamilton Houston, William Coleman, Clyde Ferguson, and Thurgood Marshall. He believed that we had to help pave the way for the next generation of leaders.

After law school when we came back to Washington, we saw less of each other as we became busy in our professional careers. However, we would occasionally have dinner, or see each other at an event, such as when I saw him several years ago speaking at a Justice Department conference in San Francisco. As we all know, Tony was an eloquent and thought-provoking speaker. He was always humble, never letting us know about his accomplishments -- how he spoke to thousands of people on the Washington Mall as a teenager or how he was a youth advisor to the Mayor of Washington before ever attending college. Tony was a modest man who never boasted of his accomplishments.  He remained that way through out his life.

But, Tony could not conceal his abilities as a gifted-speaker. When Tony spoke, he was truly remarkable. Even in college, we had to listen. As an orator, Tony Informed us, educated us, humbled us, uplifted us, reminded us, and challenged us.  For me, hearing him speak was mesmerizing, and after he spoke whether the topic was a sermon, politics, or injustice, like Saul on the Road to Damascus, you were transformed to become a better person.

From time to time over the last 40 years, I have gone to Tony’s bible study classes, to his churches, and to others events. I heard him speak and often I thought that he had prepared his remarks especially for me. On one occasion I joined a Columbia/Barnard group attending the celebration of Tony's 50th Birthday. The hall was packed with hundreds of people whose lives Tony had touched, as he had touched ours. As he spoke to the large audience, he acknowledged his Columbia family because that was what our "Tony" was to us -- family. Long before he was a minister, he was our brother who shared his wisdom, his sense of justice, and his humanity as a spiritual guide to us, his classmates. As we endeavored to achieve academic success, he educated and uplifted us.

After his health began to fail him, I visited with Tony in the hospital on a few occasions. We talked about the good old days and he spoke about how God had delivered him when he had his stroke in his car. Numerous other individuals also came to visit Tony and his phone was constantly ringing. His visitors shared with me stories of how Reverend Lewis Anthony had touched their lives.

We will miss our Tony.  We will wonder where to go to hear his words of inspiration. We must find comfort in the thought that God has called his earth angel home to be with Him.